I realized a problem with my writing: I’ve reached a soft limit of how I can communicate. There’s a lot to unpack, so let’s analogize with my cheap “pawn shop special” bass: it fulfills all my limited needs when it comes to learning the basics. I can pluck strings and learn chord progression. I don’t mind tuning it whenever I’m serious about playing it. Now if I wanted to play with others or even professionally… 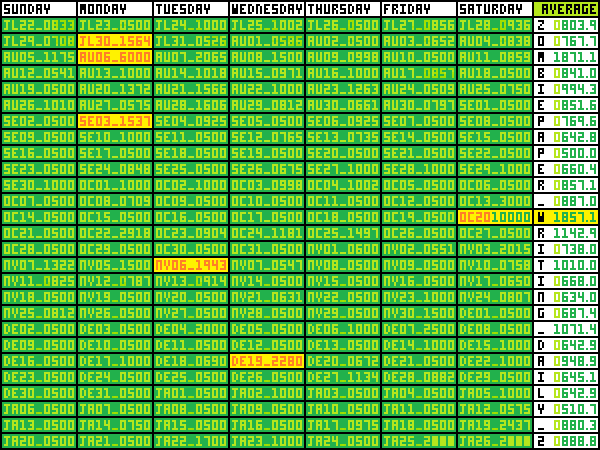 I’d either have to constantly work on this bass or get a new one.

Beginner’s tools like this bass should be a decent simulacrum for the tools of a more advanced practitioner. I shouldn’t pick up the bass and recoil with its shoddy build quality. Only through using a tool will I uncover two things: my own limits and understanding the potential of others that have mastered this tool. Are my limitations within my control? For a mechanical example, do I constantly need to tune it and check its tuning?

If it’s a perceived personal limitation, we’re not there yet.

No need to use the successes of others as justification for us to wallow in failure. Instead, keep going. That’s where I’ll shift gears away from the bass and focus on writing: I’ve been writing daily, without writing less than 500 “publishable” words, since May 17th. I’ve had some close calls and if I’m honest with you, some of those words quickly became unpublishable through my own limitations, but this isn’t about wallowing in failure.

Through this process, I’m seeing my mechanical limitations.

I’m now constantly checking my writing “tuning,” or, becoming more aware of how I “sound” overall. When you’re just starting out playing music or writing, you have to give yourself plenty of patience and opportunities to learn. You usually don’t jump up on stage right away, either in your local dive bar or your local print/digital publication, unless you want to fail due to a lack of abstract skill or definable discipline.

The spotlight can be a cruel critic.

Now that I’m getting my name out there, I’m fielding criticism from volunteer amateurs and paid professionals. Criticism is a tough thing for people to receive and I’m seeing some have trouble giving it. While I have yet to receive ad hominem criticism, and some of the feedback I’ve received don’t quite refute the central point, there’s a necessary degree of practice required in critiquing yourself before others can do so.

Writing daily is only half of it. I’m constantly doing this notion of writing a “first draft; final draft” because sometimes I don’t want or need to go back through and review it, but especially early on, I strongly advocate editing your own material. Become comfortable reading your own material. I may still cringe at certain sentences I wrote years [or days] ago, but who doesn’t? But overall, your writing should hold up in your mind.

I’ll use the beginner’s mind to return to my writing.

Especially if I’m unsure of it, I won’t immediately start off as my harshest critic. Not immediately being our harshest critic over our works does require a certain degree of building up a mental maturity to learn to overcome this, but we all must do if we wish to not only survive this life but thrive. Part of my attempts at overcoming that negative self-talk included writing at least 55 other essays on developing self-confidence.

OK, let’s assume you can take your own criticism now.

To expand on that, let’s assume that now you can read back over something you’ve written, and be comfortable with: tightening up word choices, deleting sentences, and asking yourself the most important question: “so what?” If you can do all this without going into fits of anxiety, then you can start to receive criticism from others, with the final goal of reaching the wild, crazy public. I’ve seen outlandish reader feedback.

One newspaper has a “hall of fame:” the “wall of hate.”

Many people don’t want to achieve their goals because they’re worried about hecklers. That’s fine. When I wrote about seeing Everclear, I couldn’t then convey this point: the singer couldn’t accept criticism. Of course, that’s me judging him on my writing stage with maybe 5 people in the back, versus his stage in front of around 1,500 people. But let’s assume I don’t have malicious intent and am just using this as an example.

We don’t have to let hatred from others, or ourselves, affect us.

I’ve heard some shitty things about my writing, as I’m sure he’s heard shitty things about his music, but it’s a matter of how we can choose to respond to valid criticism, vague criticism, and heckling. We all want that valid criticism that shows us what we didn’t know. We’re OK with dropping vague criticism. But we hate heckling so much that we’d rather have none of it, even if it means we don’t or won’t develop as people.

So let’s assume we can accept valid criticism.

I tell my editors that I prefer to read criticism within “the editing bay” because when I’m chatting with people, I might drop into a conversation with any mindset. I might have carved out a minute or so throughout the day to check my messages, either due to some anxiety pushing me into temporary reclusion or something more neutral. When we’re anxious and we hear some valid criticism, we’re not in the right mindset.

It might take me hours to dive into “the editing bay.”

If it’s a large document that over 100 people read, naturally, I’ll feel more insecure. I mean, that’s twenty times the audience! Over the years, I’ve published some things that have received much more attention, but let’s face it: the writing wasn’t as important as the formerly-hosted links to album downloads, or, the promise of such. So this shift in focus, where the focus was on my writing, was a big chance of pace for me.

But I say that with full self-confidence and a willingness to learn, which is where I’ve begun to notice the limitations of my understanding of communication. It’s in the little things. The equivalent to hitting a particular note and finally hearing that it sounds a little off, and no, it wasn’t holding the wrong fret. So you go to tune your guitar and it just doesn’t sound right. But you let it go. You might chalk it up to frustration at first, but the more roughness you feel around the edges of your guitar, the more you take notice.

I’ve noticed this with my writing.

I believe I’m a decently competent communicator. If I have an idea, I feel that I can convey that point, given enough words and patience from the reader. It might take an analogy like my bass guitar, and well over my usual 500-word limit to convey, but we’re here, and that’s good enough for this audience. Except, could I have communicated this point in 500 words? Yes. This would have meant cutting out, say, the part about accepting criticism.

Wait- isn’t this a logistical problem?

Yes, which is why you didn’t read something more succinct. These “Writing Daily” essays are meant to explore everything I’ve learned over the course of this exercise throughout its duration, usually resulting in a stream of consciousness consideration surrounding a central or set of themes. Here, it was learning some new things about my skillset, and skirting around this next part about learning how to continue:

I need to read more. This is a two-prong issue.

First, while I currently have an area where I might read on occasion, it’s in a secluded area, so I’ll often forget to read. After I move, I’ll move the dedicated space into my next living room or lounging area where I’ll have my stack of books to read, a place for coffee or water, a timer, scrap paper for taking notes, and a goal of reading for 10 minutes, probably daily at first. Maybe I’ll, similarly, start a Reading Daily series?

That’s where the second issue comes into play:

Second: I don’t read more often because I have trouble focusing on reading for any period of time. That’s certainly an embarrassing thing for a writer to say, but it’s here, now. So booking that 10 minutes of time ensures that while I might not be reading from a particular book the whole time, I will use most of that time to explore new topics, or more to task: learn to refine my use of language from writers with more hecklers than me.

Taking it back a step: it’s taken years to admit that reading thing.

It’s like outgrowing that cheap “pawn shop special” bass. I’ll probably never outgrow that bass because I only play it for fun. I’m not possessed with playing bass like I’m possessed by the process of writing [usually, scenes in “The Story“].

Now I need to purchase a “better bass.”